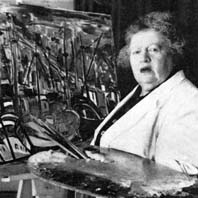 Background to this exhibition

Irma Stern who at that time was on a painting trip in Spain, had made a firm written commitment to hold an exhibition of her new paintings at the recently opened Gallery 101, Johannesburg, during 1961, on her return from Spain. However, unbeknownst to the gallery, she had meanwhile made other arrangements with the Adler Fielding Galleries, Johannesburg.

This exhibition at Gallery 101, opened by Roza van Gelderen on 9th April, 1962, is hardly ever mentioned in publications on the artist.

For the sake of public records and for research purposes, we have included links to the printed catalogue and the respective press reviews:

You need to have the free Adobe Reader to read the many PDF files!